Game Wake is a simple to configure virtual alarm clock application. It provides multiple types of alerts and features both a timer and counter mode. Four different sounds can be played. The sounds can be combined with a text message and a blinking effect. Instead of using notifications a shutdown can be initiated. Game Wake supports two operation modes: 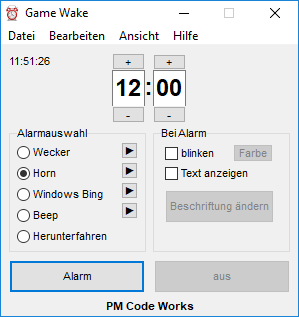 Game Wake stores its settings in an INI based configuration file. The menu item "Options" can be used to select what should be saved. Multiple languages are supported.

Game Wake is available for Debian and Windows.

After adding the PM Code Works APT repository to the system package sources, the package can be installed using following command:

In addition to the setup, Game Wake can also be downloaded as a portable version (without installation).

Game Wake has been digitally signed. To verify the signature the certificate of PM Code Works must be installed.